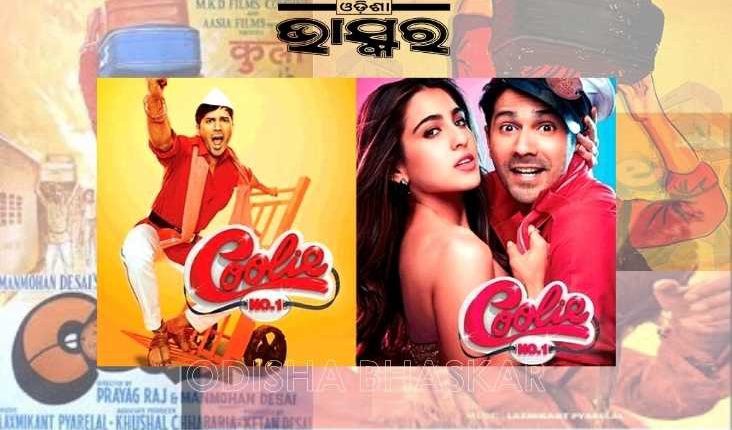 With the grand fusion of star kids and talent, starring Dhawan Saab’s son Varun Dhawan and Sara Ali Khan, the movie as per my opinion is another disappointing thing to have happened this year.
You probably want me to give it a second thought… One two three and I’m done thinking. Yup, still very much a disappointment!! Well to put it in sugar-coated words, this is the remake majority of the audience had never asked for, moreover none had desired for. The OG Coolie movie of course made by David Dhawan was maybe not that funny at it’s time but it had a special charm to it. When we watch Govinda on screen we know we’re within safe reach where one is undoubtedly bound to go through bouts of laughter. In the remake what the audience can expect is Varun Dhawan, not so much in his element, is rather trying to fit in Govinda’s shoes and failing quite miserably. He’s known to have tried his tactics and somehow channel his inner Govinda in most of his movies and he might have done so. Sadly just not in this one.
It’s the same storyline considering that evidently this is a remake but what could have been changed is the entire way of conducting things as per the timeline. So much has changed since 1995, yet the most visible change that has been added in the movie is the gaudy and awful looks that are worn by Sara Ali Khan.
Nevertheless, someone who’s sane enough would need a lot of patience to sit through the entire movie and not pick things that are naturally very unfunny and a lot many times offensive. Javed Jafferi plays the matchmaker, who goes on to teach Paresh Rawal, who plays Sara’s father in the movie, a lesson about how always the richest of people do not have what it takes to be in a steady marriage.
Now I agree that stories in this genre or per se, situational comedy do not necessarily need to have to be logical, these sorts of movies are supposed to grow on you with time. Unfortunately, the only feeling that’s going to grow on you when you sit down to watch the movie is the feeling of sheer boredom. There’s a particular scene where Sara has a dialogue that goes like, “Kuch samajh nahi aaya but funny tha.” I wish I could say the same for the movie though.
I resonate with the fact that there will be people who will watch the movie and will like or to use a stronger word, might even love the movie. I truly feel sorry for these people.
At a time where all of us need to chill, sit down and relax, this is definitely not the kind of movie one should choose, unless you do not care what’s going on in the movie and just want something playing in the background while you’re doing your chores. This movie is a huge blow, if not anything else. It could easily win the best worst movie, and well, could be a very worthy nomination for the “Golden Raspberry Awards” in the categories of “Worst Movie”, “Worst Actor” and “Worst Actress” and might put on a tough fight against other nominations.

Coronavirus won’t be the last Pandemic, says WHO Chief