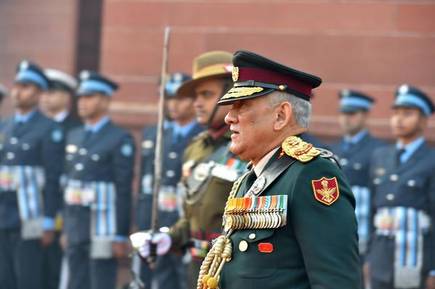 New Delhi,16/1: Chief of Defense Staff Bipin Rawat stressed on the fact that the only way to stop terrorism is to adopt the approach of the USA. The approach the USA government adopted after the devastating 9/11 incident. He also claimed that terrorism won’t stop as long as a state is sponsoring it. This is supposed to be a dig at Pakistan.

Addressing to an event in Delhi, He said, “Terrorism is here to stay so long as there are going to state that is going to sponsor terrorism and they are going to use terrorists as proxies, make weapons available to them, make funding for them, then we can’t control terrorism.”

“We’ve to bring an end to terrorism and that can only happen the way Americans started after 9/11. They said let’s go on a spree on the global war on terror. To do that you have to isolate the terrorists. Anybody who is sponsoring terrorism has to be taken to task,”

He also added “Any country which is sponsoring terrorism has to be taken to task. I feel one of the measures adopted is of blacklisting by the Financial Action Task Force (FATF) is one good measure. Diplomatic isolation, you have to do this,”.