The goal is to paint a picture of the immediate aftermath of the Big Bang when the observable universe suddenly expanded 1 trillion times in size in the tiniest sliver of a microsecond. 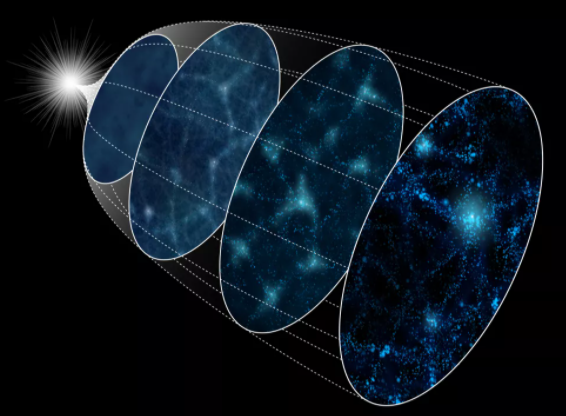 The Big Bang demonstration by simulating 4,000 versions of the universe on a massive supercomputer.

The goal is to paint a picture of the immediate aftermath of the Big Bang when the observable universe suddenly expanded 1 trillion times in size in the tiniest sliver of a microsecond.

By applying the method used for the simulations to real observations of today’s universe, researchers hope to arrive at an accurate understanding of what this inflationary period looked like.

“We are trying to do something like guessing a baby photo of our universe from the latest picture,” study leader Masato Shirasaki, a cosmologist at the National Astronomical Observatory of Japan (NAOJ).

When the universe expanded, these fluctuations would have expanded, too, with denser points stretching into regions of greater density than their surroundings.

Gravitational forces would have interacted with these stretched-out filaments.

But gravitational interactions are complex, so trying to rewind this inflationary period to understand how the universe would have looked before it is very challenging.

The researchers developed a reconstruction method to do just that. To find out if the reconstruction was accurate, though, they needed some way to test it.

So they used NAOJ’s ATERUI II supercomputer to create 4,000 versions of the universe, all with slightly different initial density fluctuations.

The researchers allowed these virtual universes to undergo their own virtual inflations and then applied the reconstruction method to them.