China regained its position as India’s top trade partner in 2020, as New Delhi’s reliance on imported machines outweighed its efforts to curb commerce with Beijing after a bloody border conflict.

Although that was lower than the previous year’s $85.5 billion total, it was enough to make China the largest commercial partner.

Displacing the U.S. — bilateral trade with whom came in at $75.9 billion .

While Prime Minister Narendra Modi banned hundreds of Chinese apps, slowed approvals for investments from the neighbor, and called for self-reliance after a deadly clash along their disputed Himalayan border, India continues to rely heavily on Chinese-made heavy machinery, telecom equipment, and home appliances.

As a result, the bilateral trade gap with China was at almost $40 billion in 2020, making it India’s largest trade purchase.

Total imports from China at $58.7 billion were more than India’s combined purchases from the U.S. and the U.A.E.

That said, India did manage to lower imports from its Asian neighbor amid demand disruptions caused by the coronavirus pandemic.

The tense relations are already weighing on India’s ambitions to bolster its manufacturing capabilities. 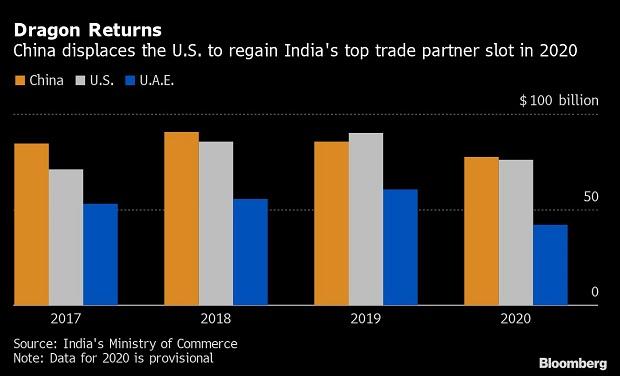