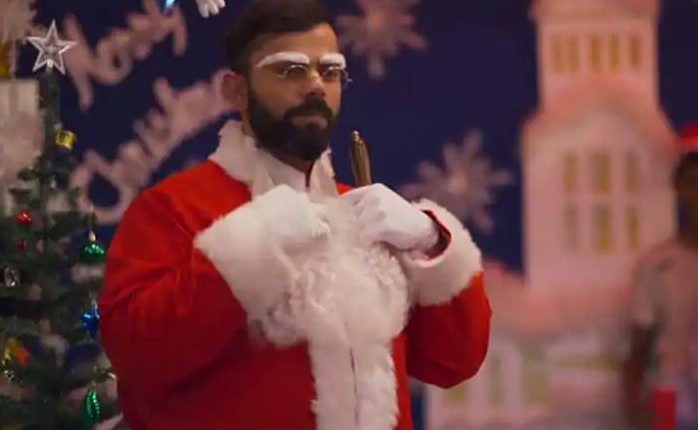 Kolkata 21/12: Team India skipper Virat Kohli dressed himself up as Santa Claus and visited a shelter home in Kolkata ahead of the Christmas eve.

Kohli took part in a Secret Santa celebrations and brought joy to his little fans in his Santa disguise.

As soon as the video was dropped by Star Sports on Twitter where Virat can be seen spending quality time with kids, fans could not hold back their apprecations looking at his heartwarming gesture.

n the video, children can be seen sitting and sharing what gifts they want this Christmas as they waited for Santa. The kids also name their favorite athletes with Sachin Tendulkar, Virat Kohli, Cristiano Ronaldo, PV Sindhu, and MS Dhoni being the more popular ones.

Suddenly the lights go out and Kohli, dressed up as Santa, enters the shelter home and the faces of all these underprivileged kids lit up with a bright smile.

The moment Virat removed his disguise, the kids were left awestruck and after a few moments of realization, they ran towards him for a hug as they all were not expecting the Team India skipper to turn up as Santa Claus.

Watch @imVKohli dress up as ? and bring a little Christmas cheer to the kids who cheer our sportspersons on, all year long!

This joyful season, let’s remember to spread the love. pic.twitter.com/VF8ltmDZPm