Manoj Mukund Narvane sets to be the next Army Chief 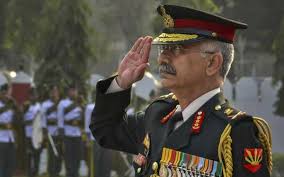 Before serving Indian army as Vice chief of army staff, Lt general Manoj headed the eastern command of Army. He also commanded the army in various critical situations and places like Northeast and Jammu Kashmir. He has given 37 glorious years of his life to the service of the nation.

His first reaction after being appointed as the next Army chief was “It is an honour to be given this responsibility”.