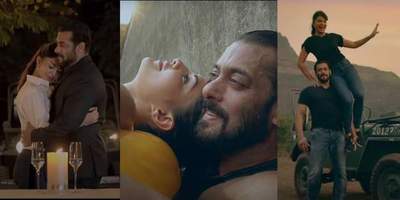 Mumbai, 10/5: The teaser of music album featuring Dabang Salman Khan and Jacqueline Fernandez is out. The entire song has been shot at Salman’s Panvel farmhouse. Salman Khan took to Instagram to share this news.
He wrote,” Tere Bina… wishing all mothers a v happy Mother’s Day(Link in bio) @jacquelinef143 #AjayBhatia @shabbir_ahmed9 @adityadevmusic @abhiraj88 @saajan_singh23 #TereBinaTeaser #IndiaFightsCorona (sic).”
Salman and Jacqueline are looking ravishing and romantic in this song. The song has been sung as well as directed by Salman, with music composed by Ajay Bhatia. The lyrics are by Shabbir Ahmed.