The Suspended MPs to protest overnight, Sanjay Singh ordered a pillow-bed from home 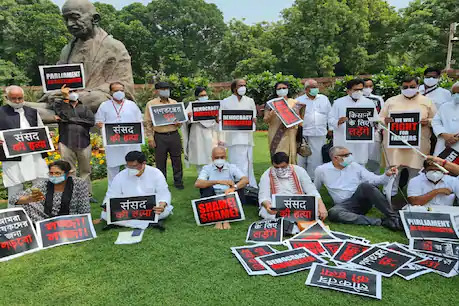 Monday is the 8th day of the Monsoon Session of Parliament. The tension between the government and the opposition regarding the Farmers Bill (Agriculture Bills 2020) continues even today. In the Rajya Sabha on Sunday, 8 MPs of the opposition who created an uproar over the Agriculture Bill have been suspended by the Chairman Venkaiah Naidu for the entire session today. In protest, all 8 MPs have sat on a sit-in outside the House. According to sources, suspended MPs will stage a sit-in protest in the Parliament overnight. The Aam Aadmi Party (AAP MP Sanjay Singh) has even ordered a pillow-bed from home.