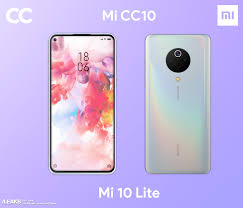 New Delhi, 21/2: Xiaomi’s Android One outings haven’t been much spectacular as the original one from 2017. The last one, which is the Mi A3, is essentially a rebadged Mi CC9 Lite from China but instead of its MIUI, the phone relies mainly on a stock version of Android. The Mi CC9 Lite was not a very powerful phone, to begin with, but Xiaomi seems to be working on improving this year’s CC10 series massively if some of the latest renders are to be believed.

A set of renders for the alleged Mi CC10 series has been released on the web and it appears to be mostly concept renders instead of actual renders. The reason we say that is due to the fact that the renders show the Mi CC10 and Mi CC10 Lite but both the phones appear to be similar, which is not possible given that the Lite version usually comes with a host of compromises. Hence, we suggest you take these renders with a pinch of salt.

That said, Xiaomi is upping its game in terms of design and build quality even on its affordable phones and the Mi CC10 series could end up being quite similar to this. And chances are that Xiaomi may use the Mi CC10 Lite again this year as the base for the Mi A4, which might come to India as Xiaomi’s only phone running on a version of stock Android.